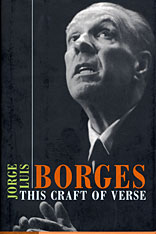 Probably the best-read citizen of the globe in his day, he draws on a wealth of examples from literature in modern and medieval English, Spanish, French, Italian, German, Greek, Latin, Arabic, Hebrew, and Chinese, speaking with characteristic eloquence on Plato, the Norse kenningar, Byron, Poe, Chesterton, Joyce, and Frost, as well as on translations of Homer, the Bible, and the Rubaiyat of Omar Khayyam. Though his avowed topic is poetry, Borges explores subjects ranging from prose forms (especially the novel), literary history, and translation theory, to philosophical aspects of literature in particular and communication in general. Throughout, Borges tells the very personal story of his lifelong love affair with the English language and its literature, ancient and modern. In each lecture, he gives us marvelous insights into his literary sensibility, tastes, preoccupations, and beliefs.

Whether discussing metaphor, epic poetry, the origins of verse, poetic meaning, or his own “poetic creed,” Borges gives a performance as entertaining as it is intellectually engaging. A lesson in the love of literature and language, this is a sustained personal encounter with a literary voice for whom the twentieth century will be long remembered.