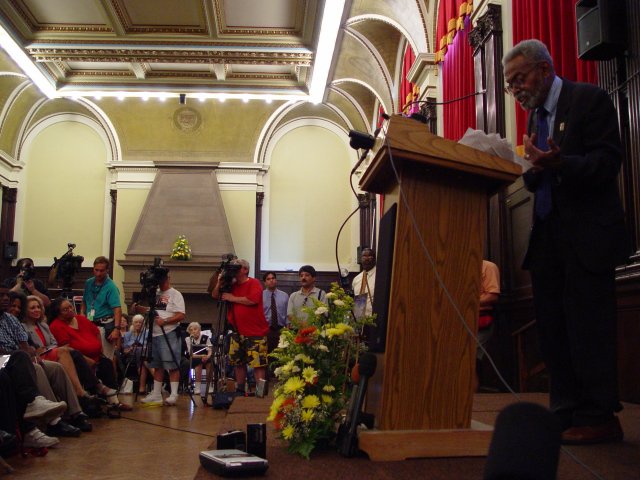 Certainly the ADL will have to go after these “Anti Semites” using the “Big Lie” and “Spewing Anti-Semitic Venom”! And the growing list of progressive democratic people around the world who will have opinions about Israel and Political Zionism independent of the ADL, the ADL will have to attack and slander them as well

I challenge the ADL to set up a national television program so that we might debate this issue. We can project the poem on a wall and go down line by new and discuss it. If not that then why not a forum or debate some place like NYC Town Hall or at Symphony Hall in Newark.
Why not take a survey of those who heard the poem at the Dodge Festival? Those who registered and the students brought by schools could be contacted and a survey taken to reflect just the majority of people hearing the poem thought, not just some shadowy surrogates of Imperialism who are trying to convince people that I and my poem are the enemy not US and Israeli Imperialism.
I have already gotten a great many communications praising the poem. A great many E-mail letters and phone calls not only praising the poem, and the poet for writing it, but also opposing the attempt to violate my first amendment rights by this oft repeated ADL skin game of calling critics of imperialism Anti Semites.
I have already said, in answer to what Governor McGreevey is quoted as demanding that I apologize and that I resign as NJ Poet Laureate. And I have said repeatedly that I will do neither. It is unfortunate that Governor McGreevey has been stampeded by paid liars, and apologists for ethnic cleansing and white supremacy, bourgeois nationalists and the dangerously ignorant, to be panicked into joining in the ADL’s slander, belittling my intelligence, and insulting not only my person, my family, my fellow artists and activists who know all this is just the feces of a very small cow. But they are also attacking my work in the arts and my social political views. By demanding that I apologize to Evil and Submit to some fundamentally racist and politically motivated call for me to resign as New Jersey’s Poet Laureate, he is insulting the broad group of people who know he is incorrect and who have read and celebrated and valued my work. And that is a grave mistake, one I am hoping he will correct.
“Somebody Blew Up America!” was written Oct 1, 2001. A month after the terror attack. Almost immediately I circulated it around the world on the Internet.
In addition, I have read this poem in Spain, Portugal, Africa, Switzerland, Italy, Finland and it was translated into German and read on German radio, at Universities and other venues across this country. It has become one of the most circulated of my poems.
Yet it was not until I read the poem at the Dodge Poetry Festival that I got negative response from three people that I know of. The overwhelming response was an almost thunderous applause. I even had to come out and take a second bow at one performance. So why now and Who, as the poem asks, is behind it? Perhaps the forces which have dishonestly tried to characterize the poem as “venom” or merely “a harangue” (just as they called John Coltrane’s music “Barbaric Yawps”) are simply, the Charlie McCarthy voices for Bush & Sharon’s Edgar Bergen’s. Empty-headed devilish dummies constructed of wood and painted and costumed to look like it is real people speaking, when all the time it is imperialism is the ventriloquist speaking through their mouths,
NO, I WILL NOT APOLOGIZE, I WILL NOT RESIGN. In fact I will continue to do what I have appointed to do but still have not been paid to do. Publicize and Popularize poetry and poets throughout this state. To set up new venues and new networks for poetry reading and workshops, in the state’s libraries and schools and other institutions. Hopefully initiated and given paradigm right here in the Newark Public Library, its branches and throughout the school system. Therefore giving more of our citizens access to poetry, involving poets of all nationalities, both male and female, of diverse experience and styles. I have already begun to enlist coordinators of poetry programs throughout the state, so that we can network a tour of poets, hopefully beginning in January, throughout the state.
To do this I will be approaching local, county, state, federal and private funding. And expand our budget with the cooperation of these other existing programs. We will ask that poets POET-ON! That they begin to produce at least one poem or publish a poem monthly, in the most modest forms, Kinko style, and give them away if they have to. That they begin to set up readings not only in the places we mentioned but also in parks and restaurants and in neighborhoods.
We say this because we feel that this state and indeed this nation and this world is desperately in need of the deepest and most profound human values that poetry can teach. That is what Keats and Du Bois called for the poet to do, to bring Truth and Beauty. To be like the most ancient paradigmythic image of the poet. To be like Osiris and Orpheus, whose job it was to raise the Sun each morning with song and story. To illuminate the human mind, and bring light into the world. POET ON!

Editor's Introduction Stiliana Milkova   Natalia Ginzburg (1916-1991) was an Italian writer, translator, playwright, and essayist. She worked as an editor at...
diari