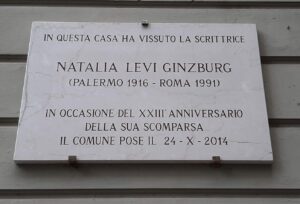 Natalia Ginzburg (1916-1991) was an Italian writer, translator, playwright, and essayist. She worked as an editor at Italy’s premier publishing house Einaudi, alongside authors such as Cesare Pavese and Italo Calvino. She was at the center of Italy’s flourishing post-war cultural industry, and in 1963 her novel Family Lexicon won the most prestigious Italian prize for literature, the Premio Strega. Her works include novels, collections of short stories and essays, plays, and literary criticism. She translated Flaubert and Proust.

Her life was difficult, but she sublimated hardship into superb writing. She grew up in Turin, the fifth child of the renowned Jewish professor Giuseppe Levi and his Catholic wife Lidia Tanzi. Natalia lived through the horrors of fascist Italy and the anti-racial laws. In 1940 she accompanied her husband, the anti-fascist political activist and the co-founder of Einaudi Leone Ginzburg on his internal exile. And in 1944, shortly after she followed him to Rome with their three children, Leone was tortured and murdered in a Roman prison. They had been married for six years.

She established herself as one of the most revered 20th-century writers, crafting a lucid, dispassionate voice that narrates war, exile, abandonment, disillusionment, resignation, apathy, and death through the intimate—and often oblique—perspectives of marginalized figures. She weaves autobiography, fiction, and non-fiction into new literary forms that defy the borders of genre. Today, thirty years after her death, her writing is more relevant than ever, as the geopolitics of war and violence and the hypervisibility of suffering, death, and disease are reshaping both literature and our relationship with reality.

This special issue “Reading Natalia Ginzburg” responds to the renewed interest in her writing in the Anglophone world and posits that Ginzburg’s texts capture many of our own struggles today. As Katrin Wehling-Giorgi comments it in her contribution:

Re-reading her works in the midst of this devastating pandemic, I can newly relate to the rawness that stands out amidst the everyday in her writings, to the acute presence of trauma in the face of personal and collective hardship, and to the material constraints of family commitments in the intellectual and practical life of women that she relates so compellingly.

Or, as Natalia Ginzburg puts it in her essay “Silence,” and as the global Covid-19 pandemic has shown, “Today, as never before, the fates of men are so intimately linked to one another that a disaster for one is a disaster for everybody.”

“Reading Natalia Ginzburg” introduces the general reader to Ginzburg’s life and writing; it explores the texts, voices, bodies, and spaces that define her style and subject matter; and highlights the work of her translators. It constructs an accessible scaffolding with multiple points of view and multiple points of entry.

Part I, “The Examined Life: Natalia Ginzburg’s Life and Works,” outlines the framework for approaching Ginzburg’s biography and literary production. Lynne Sharon Schwartz’s preface to her translation of Ginzburg’s collection of essays A Place to Live presents Ginzburg the essayist. The contributions that follow—by Andrew Martino and Chloe Garcia Roberts—dwell on Ginzburg’s essays and the lessons they teach us. Jeanne Bonner discusses the paradoxes of Ginzburg’s narratives and their representation of loneliness and loss. Concluding this part are two significant pieces: an excerpt from Sandra Petrignani’s recent biography of Natalia Ginzburg, La corsara, in Minna Zallman Proctor’s translation—an excerpt that depicts Natalia’s life around the time she met and married Leone; and an interview with Sandra Petrignani herself.

Part II, “A Poetics of the Real: Natalia Ginzburg’s Voices, Bodies, and Spaces,” explores in more depth Ginzburg’s unique style. Katrin Wehling-Giorgi discusses the forging of Ginzburg’s female voice out of real and existential exile, both as a Jew and as a woman operating in what was still a deeply patriarchal culture. Serena Todesco listens attentively to Natalia’s recorded voice whose aural presence lends a key to reading her works, offering an insight into her inner world and poetics, and constituting a means of resistance. Enrica Maria Ferrara’s contribution sheds light on Ginzburg’s representation of queer identity in the novella Valentino and argues for the text’s intersectional feminism avant la lettre. Italo Calvino’s essay “Natalia Ginzburg or the Possibilities of the Bourgeois Novel,” appearing in English for the first time, articulates crucial components of Ginzburg’s singular style. In the closing essay Roberto Carretta maps and then meditates on the topography underpinning Ginzburg’s gaze—Turin’s real and metaphysical cityscape.

Part III, “The Words Become New: Translators on Ginzburg / Ginzburg on Translation,” foregrounds the role of translators in making Ginzburg’s works accessible in the Anglophone world. In analyzing Voices in the Evening, Eric Gudas makes a compelling argument for the novel’s urgent re-translation. Minna Zallman Proctor reflects on translating Ginzburg’s novel Caro Michele while Jenny McPhee converses with Eric Gudas about translating Ginzburg’s humor and eccentricity in Family Lexicon. Natalia Ginzburg was a translator herself and thus Part III concludes with her remarkable translation manifesto published in English for the first time—her translator’s note to Madame Bovary. Minna Zallman Proctor’s skillful translation of Ginzburg on translation displays Ginzburg’s skills as an essayist and brings us back full circle to Part I.

The three parts of “Reading Natalia Ginzburg” that I have outlined here are in fact interconnected, each illuminating aspects of the other two, presenting a view at once panoramic and up-close.

This special issue would not have come into existence had it not been for Eric Gudas’s astute eye and profound knowledge of Natalia Ginzburg’s works. I am grateful to all the contributors for their time, immense expertise, and enthusiasm. “Reading Natalia Ginzburg” gives space to voices that are diverse and deep, moved by respect and passion.

Part I. “The Examined Life”: Natalia Ginzburg’s Life and Works

“A World Filled with Echoes: on Natalia Ginzburg’s The Little Virtues” by Andrew Martino

“Walking with Natalia: On Reading ‘Winter in Abruzzi’” by Chloe Garcia Roberts

“Putting a Brave Face on Loneliness and Loss: Natalia Ginzburg’s Family and Borghesia” by Jeanne Bonner

“On Female Genius: A Conversation with Italian Writer and Ginzburg Biographer Sandra Petrignani,” translated from Italian by Stiliana Milkova and Serena Todesco

Part II. “A Poetics of the Real”: Ginzburg’s Voices, Bodies, and Spaces

“Forging the Female Voice Out of the Ruins of History: Reading Natalia Ginzburg” by Katrin Wehling-Giorgi

“Natalia Ginzburg’s Speech Acts: The Female Voice as a Form of Resistance” by Serena Todesco

“Natalia Ginzburg or the Possibilities of the Bourgeois Novel” by Italo Calvino, translated from Italian by Stiliana Milkova and Eric Gudas

“The Light of Turin: Natalia Ginzburg’s Cityscape” by Roberto Carretta, translated from Italian by Stiliana Milkova

“On Humor, Eccentricity, and Sound in Family Lexicon: A Conversation with Ginzburg Translator Jenny McPhee” by Eric Gudas and Jenny McPhee

Editor's Introduction Stiliana Milkova   Natalia Ginzburg (1916-1991) was an Italian writer, translator, playwright, and essayist. She worked as an editor at...
diari